The third edition of the Companion is upcoming in 2023

Unique in Irish music, this encyclopedia was first published in 1999, with a major updated edition in both book and digital form in 2011. The twenty-three years since the book's inception have been a period of great technological changes for the music scene, particularly in communications, and the eleven years since the much-developed second edition have also been marked by transformations, particularly by the on-line teaching-and-learning and performance which the 2020-22 covid crisis has created. The numerous new Irish citizens who have come from cultures world-wide is also a major new issue which demands reassessment of one-time certainties and the questioning of culturally-embedded assumptions. And, not least, the continuing outside-Ireland interest in the music, in both performance and learning, has created a new cultural Diaspora which presents fresh challenges.

The profusion of published local and major studies related to the music, the explosion of web-based information, and the normalisation of Irish-traditional music within popular musics which are consumed world-wide has also created high-profile players: the trail blazed by The Chieftains has been widened, heightened and advanced beyond what could not have been imagined by those whose commitment forged the 'revival' through the 1960s, let alone those who formed the lodestone Cork and Dublin pipers' clubs 1898 and 1900, or the ground-breaking Seán Ó Riada himself. Not least, there have been the deaths of many, many formative stylists whose artistic talent has shaped the music we know and play today.

Thus the third edition will not only be a thorough update, but will include new topics which involve and are of interest to all who play and listen to the music. Among those is not only consideration of the issues mentioned above, but also a look at the economics of teaching and learning - what it costs to learn the music, how well are those who teach it rewarded. Such information has been generously given by those involved, in summary form, and - with regard to ethics and privacy - with no indication as to 'who' or 'where', but nevertheless opening up a previously silent and even mysterious key, modern-day dimension of passing on the music. Each county on the island, and Irish communities abroad, will be covered with regard to instrumental song, dance and music style and promotion, as will related cultures in Scotland, Wales, Man, Canada ad Brittany.

Ever since the first edition, gender has been dealt with as an important issue in opportunity, visibility and commendation, a subject which was expanded in 2011. Its coming dramatically to the fore in 2020 now demands deeper exploration, and key commentators will contribute both historical findings and sociological thinking. Another dimension of transformations will be given in analysis of the profound roll-of-honour that are the Comhaltas Ceoltóirí Éireann competitions over the last 71 years since the the organisation's founding in 1951. This will illustrate national, regional, gender and instrument trends, and tendencies in the selection of the top players.

Related to this is looking at the blossoming of non-competitive, merit awards such as TG4's Gradam, commercially- and culturally- impelled 'oscars' systems which challenges the public, open adjudicator-panel; Oireachtas na Gaeilge will be reviewed in this context also. The books listings will be expanded, including local publications, with summaries of major work relevant to the needs of a collective information pool, and blogs and websites on seasonal schools, organisations, research and instruments will be covered. So too new directions and regrouping in the music - such as the formation of Cruit Éireann in 2016 for the harp - including organisational development in Na Píobairí Uilleann and the Irish Traditional Music Archive, the consolidation of third-level education structures in music and dance led by IWAMD in Limerick, the public-broadcaster's assignment of Traditional music to the Irish-language domains of Radio na Gaeltachta and TG4, and the expansion of Arts Council, Culture Ireland and other funding for creativity and touring.

This edition will also be meshed with the performance initiative which grew out of the 2011 volume - the Compánach audio-visual concert and its 2-CD album which have all tune-types and county-by-county music as described in that book. It will also link to the DVD and online video - Turas, Virtual Ireland in Music - in which the Compánach music is copiously illustrated with 700 images that the book cannot carry, and which in the digital formats can be paused and replayed for contemplation and discussion, intended as a versatile education tool.

Questions, ideas, comments and critique are sought now from those involved in the field. Notices and review copies of printed books, pamphlets and other data are welcome for potential inclusion.

To date, 'The Companion' is the largest single collection of diverse, essential data in Irish Traditional music. It's earlier editions have brought together the knowledge of c. two hundred contributors in an easy-to-use A-Z format. The topics are addressed in the book by a total of c. 1800 individual articles, by 200 different witers, all of which are listed on this website: 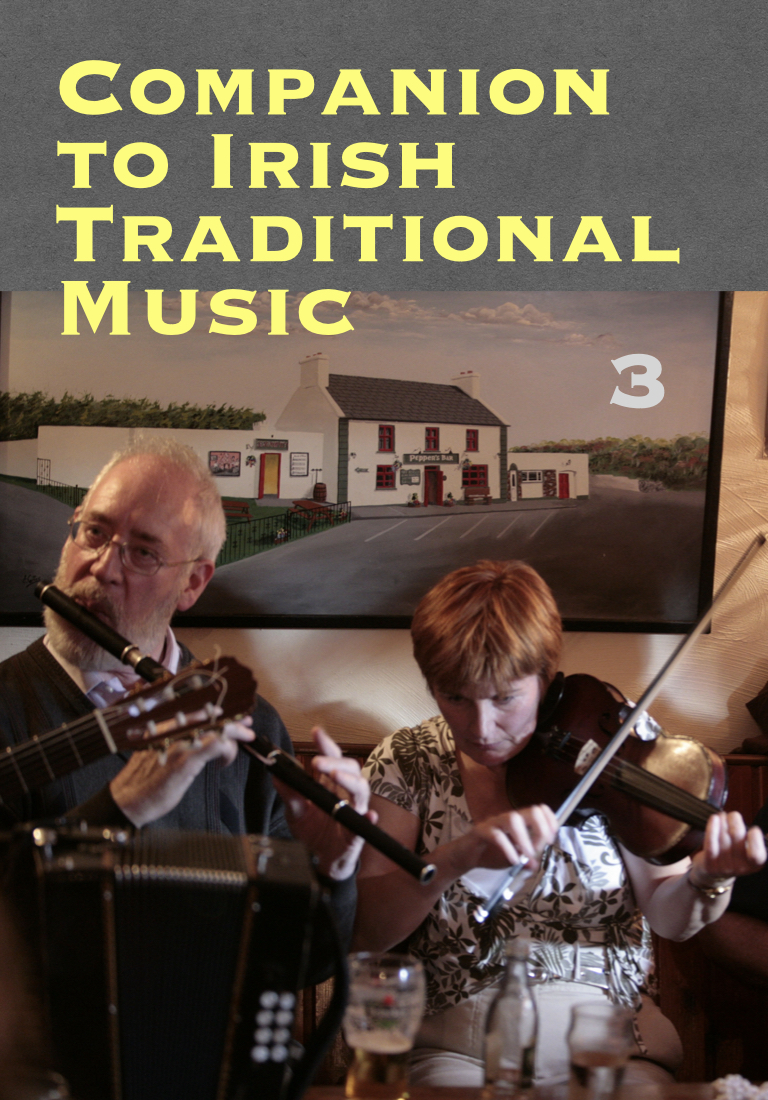 This 1833 work is 'Snap Apple Night' by by Daniel Maclise, the earliest painting of indigenous Irish music in context, the earliest of a traditional-music ensemble and also of a tambourine in Ireland. Aspects of the picture are acknowledged as intentionally playful, making it possible that the depiction of fiddle, flute and pipes together may be fanciful - as may be the inclusion of a perfect, hand-struck tambourine, an instrument which was common in 18th-19th century art as an evocative symbol.